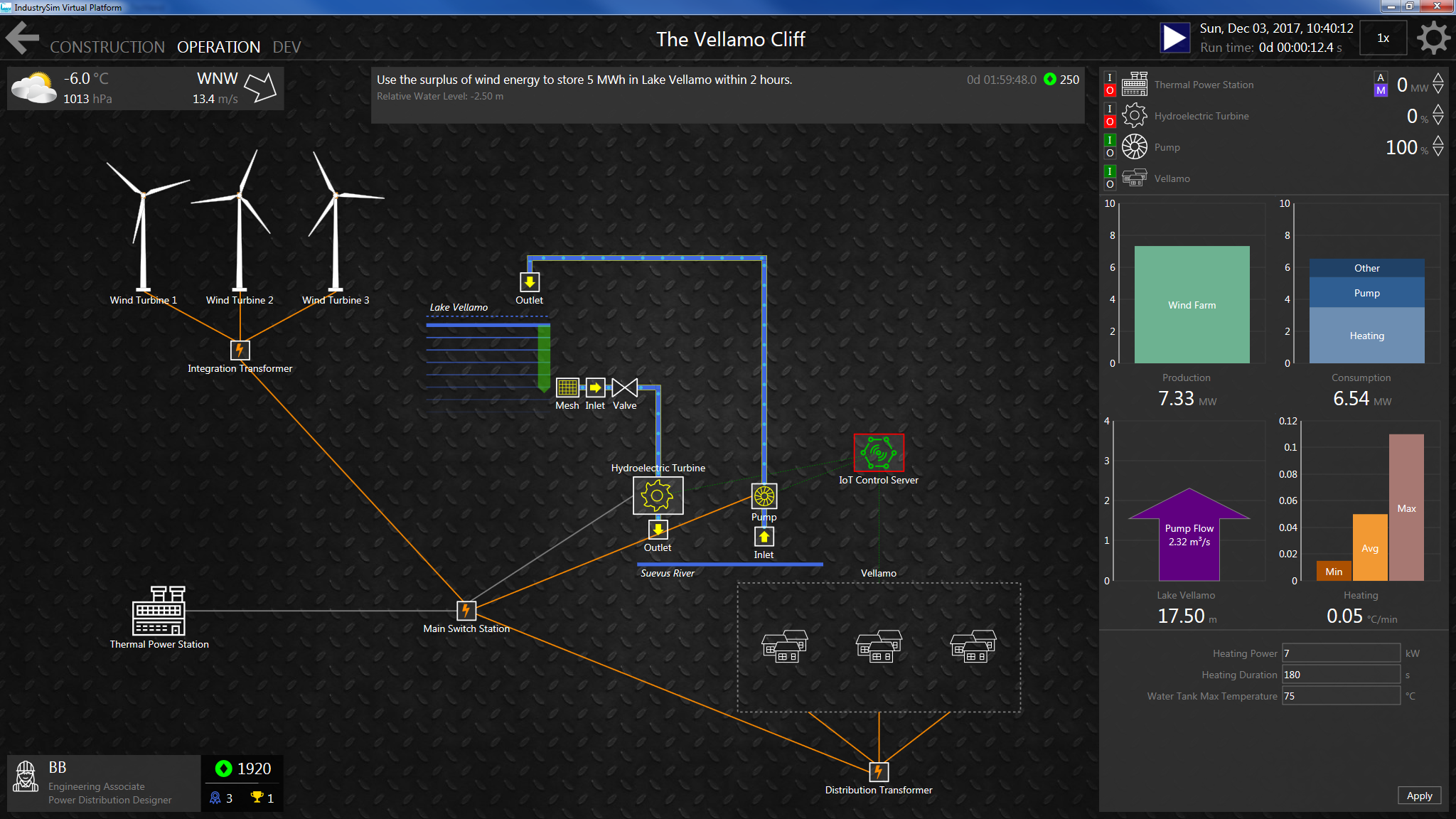 The Internet of Things has proven useful in education and engineering, but how can it be a thrill in a game scenario?

The IndustrySim scenarios are going to include many gaming events. There will be “traditional” challenges, but also novelty ones, concerning industrial IoT applications and Big Data analysis with optimization.

We have now finalized the IndustrySim Virtual Platform’s Vertical Slice (VS) – a preliminary software version that presents the selected capabilities of the complete IndustrySim product. We keep to improve the software every day, and your feedback is very welcome!

While our universal Editor is under heavy development, we have already set up a demonstration scenario taking place in a harsh climate zone. In this scenario, there is a small town, down in a valley, with a few thousands of houses heated by electricity. Each house has a water tank of 4000 liters (~1060 US gallons) to store the heat in. An old thermal power plant exists in the neighborhood, but it is very, very expensive to run, due to high fuel costs and environmental limits for emissions.

The local residents have recently invested in a wind park with a few wind mills, and restored the old piping and flow gates of the lake situated on a plateau close to the village. A pump system to move water up to the lake when there is a lot of surplus wind power available, has also been installed recently. The pump is equipped with a variable-frequency drive control for the motor, so that it can be run also with less than full power.

The houses are all equipped with IoT devices and a smart control of the heating system. These IoT devices exchange signals with a common server, where the Optimizer program is running to help making the town’s electric grid smart.

Now it is your turn to run the electric production to match the consumption, and prepare the town to sustain in changing weather conditions. Through the IoT devices and the Optimizer, you will control the Smart Electric Grid.

Are you ready to face the challenge and to play through a realistic and interesting game scenario with process equipment and IoT/Big Data solutions in your hands?

This screenshot depicts the Operation Mode during the gameplay scenario of the Vellamo Cliff. There is a surplus of wind energy due to intense winds, so the player has enabled the pump to store the energy for later. If she manages to store 5 MWh of potential energy in Lake Vellamo within two hours, she will gain a boost of points leading to the professional promotion. 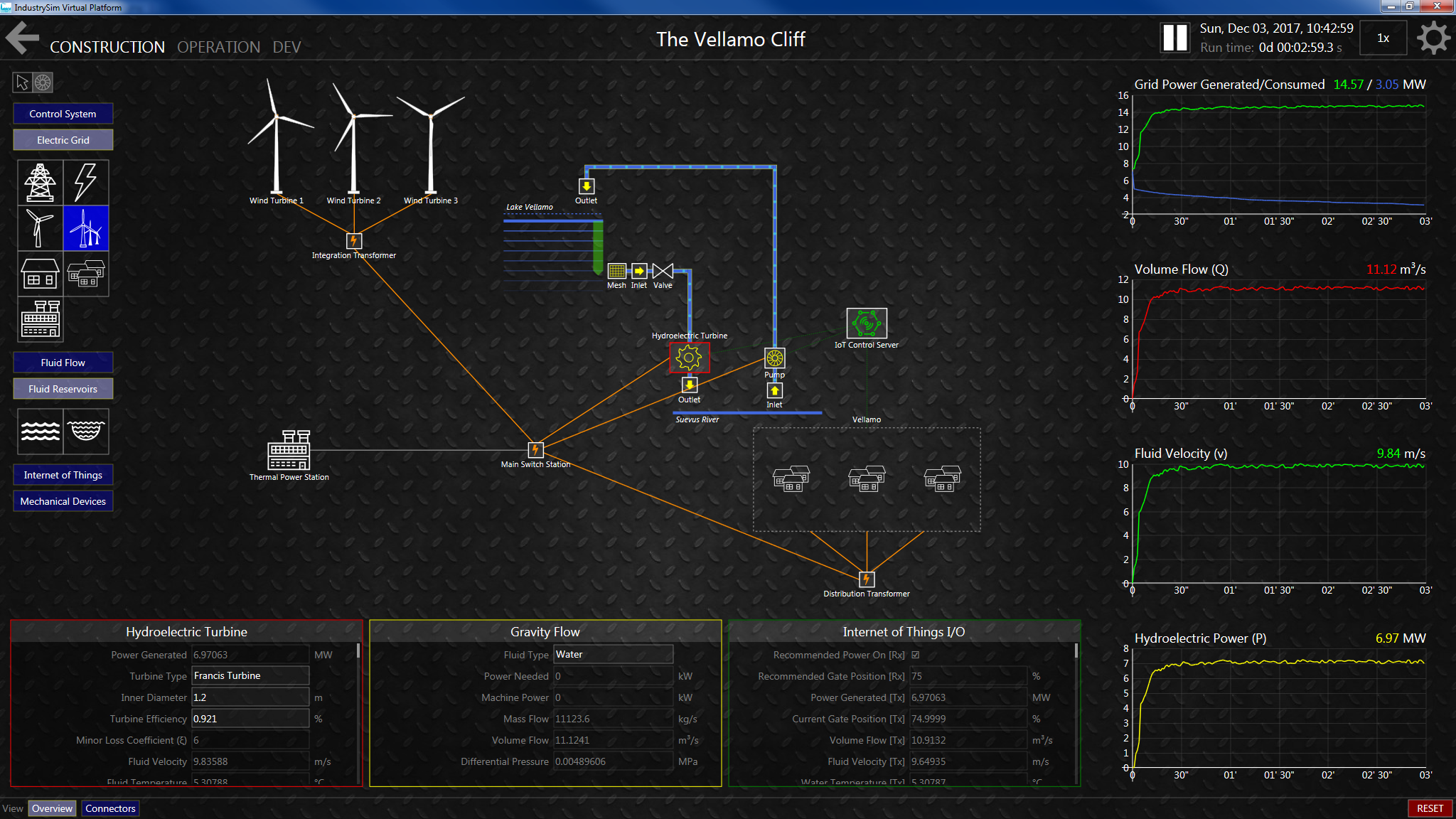 This is the Vellamo Cliff scenario in Construction Mode; to the left, there is a palette of device classes that can be used in the setup. For each component and subsystem (e.g. a fluid flow), a set of properties can be set (two boxes at the bottom, respectively). These settings are directly used in the physical simulations of device’s behaviour. The plots on the right show the ongoing simulation of the Hydroelectric Turbine after the user has adjusted its parameters.

Any device can also be enabled to exchange selected data via IoT protocol, which can be monitored in the third box. The Editor is going to be fully modular with the ability to add and exchange the user’s own devices. 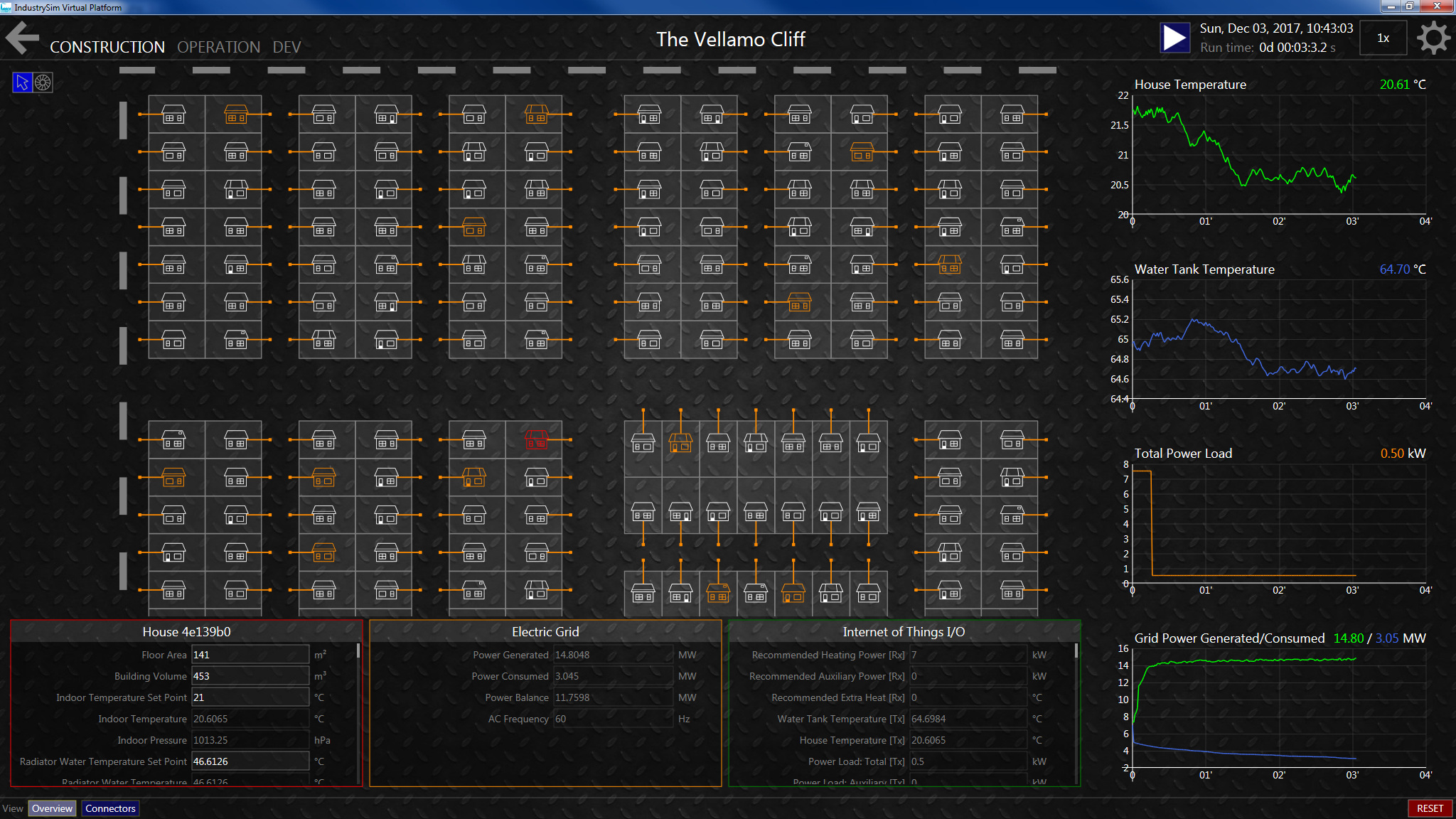 Once you zoom in into a component, either in Construction or Operation Mode, the inner workings of it are revealed – it’s called a Semantic Zoom. This screenshot depicts a Vellamo Town when zoomed in; the user can see and select individual households, each one simulated independently with its individual properties and characteristics.